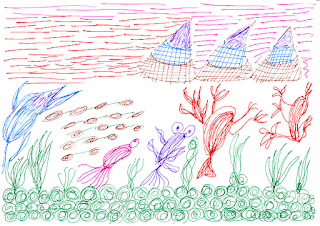 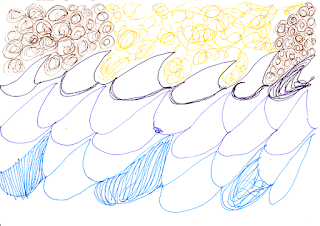 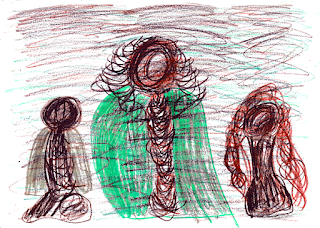 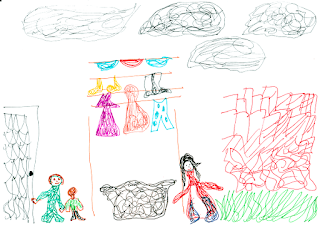 In response and respect to Blogging exposure's 27 March prompt about

The quote goes on from That deep, dreamy, raw place where conviction and commitment meet:

Right now, that place embraced the whole of me and disgraced me out of my inertia this morning. That place was crackling with energy, ready for a workout. When it got its workout, I would be so ready to take on the world and feel better about myself and other people.

And with that paragraph our dreamer/narrator transfers from the bedroom to the dining room.

That sequence happens to be one of the things I was proud of writing - and hopefully living - in the 2000s.

Yes, the early 2000s. January 2001 or February 2001 from the internal evidence [of perhaps the previous scene or two - if not a little earlier]. And there is some external evidence. I made a cover from a Nova picture about the beach with a man and a boy. That cover was dated 6 January 2001. And I wrote that date into the webpage's header.

Some of the things might be a little later like objects are created by people and the comment about a certain divergent thinker with Austrian roots who got into the Anglophone consciousness twenty years before the writing and a few years after he died.

Whether that thinker is in the Francophone consciousness... I will not go there today.

Now I obviously had an idea about where that piece was going. And where the narrator was going and where I-as-author was going. You know - a sense of destination.

And there was a reference to a philosopher I had barely known in 1998 - Soren Kierkegaard - he's the one who talks about despair and dread and was one of the first Existentialists. I met him in Sophie's World which is by Jostein G.

Kierkegaard talked about these three stages - and most of the characters can skewer stage theory when they need or want to or when it just doesn't suit them. Pun nearly intended. There is a barbecue.

[and those gatherings of 5-10 people would not be allowed now! Not here in 2020! and not in the next six months either].

Before you say: Of course geopoliticans are allowed to dream!

That whole paragraph is about destinations - to which destiny is strongly tied together; choice - one of the characters says I want reality. I want equality. I want choice. [actually they said it the day before when they were trying to justify what they were doing and what they wanted for the future].

And tolerance - three of the middle sentences are directed to it. The ones about effort; achievement and commitment.

The Deep, Dreamy, Raw place - yes, all three of those qualities inform and shape each other - is a place which can be close to heaven or a fast track to hell.

I say often that dreams are funny things. Whether you dream them in the day or in the night ...

And when I think of that whole quote - beyond the one in the header - there is a lot of force there. And it is almost religious in its fervour. It was only meant to be humanist and philosophical. You know - taking on the world and feeling better about yourself and about other people? And what it took, again, to get there.

It's about a world of people who are emotionally intelligent and morally expansive. #zonesofmoralconcern #emotionalintelligence #moralexpansiveness #caring #justice

People who care about their consciences and consciousness - both their own and those of others.

It's about a journey from charity to social justice.

It's about boys who raise crabs in the wild and put them into aquaria despite all the rejection - or at best limited acceptance - and make a way to initiate people into these mysteries in rockpools.

It's about honest discussions all the time. Discussions where de Bono and Piaget are mentioned like long-lost buddies or mates. de Bono is a very divergent thinker and uses mindsets and of course his Thinking Hats [our favourite thinking hat is the Yellow Hat closely followed by the Blue Hat - we find all the hats very waffo!]; Piaget thinks about moral development. #explainthislikeimnine #thelureofreward #thefearofpunishment #jeanpiaget #edwarddebono

And who stole whose thunder? That whole following your own impulses regardless of the demands of the environment. And wanting to know the bottoms and the depths of thinking.

And not wanting to miss out on Monty Python because of a "stupid prank" your brother played. Or on going to the market with a neighbour because one of your relatives-in-law is xenophobic or some other kind of -phobe/-misist.

Surely to feel is to behave and to behave is to feel - and that applies to people; animals; objects like glasses and trays and orange squeezers and knives and watches. If your watch becomes crotchety or tired I am not responsible. [because you forget to set him]. #centraleuropeantime #clockreading #clockwatching #ifyoubreakaglassyoushatteritsheart #baconandfriedeggsfortheeating

Where people can ask Is that photocopier a mechanical object or a technical object? and be heard out. [and then the whole Oh no! We're going in circles again!]

There is a bit of a Jungian moment about the anima and the animus and the imago - [...]Think about how the man in you would hate to be left out in the cold, or despised, or used.

And the song I was thinking of was sipping cocktails over breakfast in bed somewhere in Evita. Except in that house orange juice is had and made with squeezers. Three Valencia oranges, if you please! Is that not extravagance?

Also extravagant is the way that one of the characters jokes about the Black Plague. I would have to take up my younger self quite seriously about that one. I might write a letter to the Middle Ages or to some people in the Middle Ages or classes or groups of people - like knights and nuns and prioresses and the guy who works in Charlemagne's estate that Eileen Power wrote about back in the first third of the 20th century.

I believe that cake was from a few days before because everyone who lives or stays in that house practises delayed gratification when it comes to sweets and cakes especially when that cake was made and enjoyed over a weekend.

When it comes to hard candies procured from picture theatres and laid on the table - all bets are off.

And I would say the apex of human development is quite a destination. Especially when you keep smiling and keep it in perspective. Like one of the other characters is able to do after he has been, as he expresses it, "cheated out of my mates for the past two days".

Even more so when you had to experience lies; deceits; tears; tantrums; fear and worries to get there/come here.
Posted by Adelaide Dupont at 1:41 pm No comments: