Welcome again to the #ShortBusFlashBlog edition for August/September 2017.

I write at Halfway up Rysy Peak. Some of you may have seen me at NOS Magazine writing comments to the Atypical streaming series.

Some of you might have met me at Ellen Seidman's Love that Max.


I'd like you to look at this map and to think about it.

The three big towns on this map are Horsham Rural City; Stawell and Ararat.

Even though Wimmera involves Ben and Fab as protagonists, it does not begin with them.

Throughout my literary career I have rarely underestimated the power of a good prologue, and the Wimmera prologue certainly is all that.

"Dad told them never to cross the highway," it begins. And indeed crossing the Henty or the Western Highway gives many people a good fright.

It doesn't Jed or Danny. They are yabbying in a dam like the ones in this map.

J and D end up finding something in the lake - like in so many stories of this type.

And I'd like you to think about the distance involved. The locations in this map are four and five hours away from Melbourne, to the west and to the north.

Fab is trying to make a future in either Stawell or Ararat so that's where - and why - those two towns are there.

Ben remembers a school camp at the Grampians National Park and he ended up going somewhere much more boring.

And the Wimmera newcomer knows Ben's parents and tries to inveigle himself.

At first Ben is resistant, like so many country boys of 10 and 11 years old might be. He is told, though, to be polite to adults, and he sometimes desires to have conversations with them.

Fab from the start is suspicious. He thinks Ronnie is a secret agent, and he is probably not far wrong.

It seems five years behind the City in some respects especially when it comes to education and law enforcement. This will become important later on.

Brandi is using his background strategically here as we will see in pages 39 and 40. 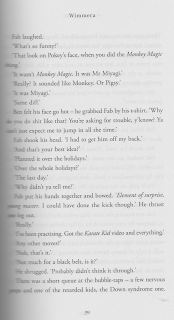 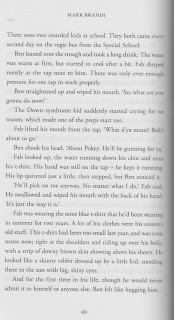 Young Fab is being bullied and his great friend Ben is sympathetic and heroic.

We see the difference between The Karate Kid and Monkey Magic - the former is shaping Fab's response to a bully after the holidays.

And what was the element of surprise on the bottom of page 39?

When I read it I wanted to say, "It's their/our Wimmera too!"

There was a short queue at the bubble-taps - a few nervous preps and one of the retarded kids, the Down syndrome one. There were two retarded kids at school. They both came every second day on the vegie bus from the Special School.


And later on: The Down syndrome kid suddenly started crying for no reason, which made one of the preps start too.

In regional Victoria especially "vegie" is used where many Americans would say #shortbus. The other time I would read it a lot would be in reference to veggie maths.

And the travel in the bus from the Special School would be quite a distance - two and three hours each way. No wonder you would cry - at the injustice and the torture of it all.

And there is a lot of etiquette these boys enforce about the bubblers which are the drink fountains in USian English.

I am glad Ben felt like hugging Fab at the end of page 40. This results in a lot and I like the peer-to-peer affection; the intimacy between two best friends.

I wonder if there was a similar alliance.


Here is the Sporting Reason:

every year in the TriState Games between South Australia; New South Wales and Victoria there are teams.

The two might be part of the Horsham Rockets or Axis or another Horsham team.

In three short months time - 12 to 17 November 2017 - the TriState Games will be in Horsham for the last time.

There are teams in the Grampians - the Pinnacle team in particular.

When you see the posters in the sandwich shops of the main streets, it's great.

I first learnt of the Games in 1998 or 1999 when they were in Benalla and Tim Huber was competing in them and had won a whole lot of medals.

It's as good a reason to come to the Wimmera, as say, the Tom Willis statue and associated football ground, or the Horsham and District Football League or the Wimmera League.

Ben's big sport is cricket; Fab has a flirtation with martial arts.

In 1989 the first time the TriStates were held outside Mildura where the Christie Centre is based was in bordertown Wodonga
Posted by Adelaide Dupont at 12:12 pm

You have a nice blog!

Have a great day!

it's been great seeing your work.

Reading the post about Clarins and arthritis. And the Sephora Haul.

There's a woman from New Jersey whose work you might enjoy - Mallory Zieger.

And you are part of the great day too.